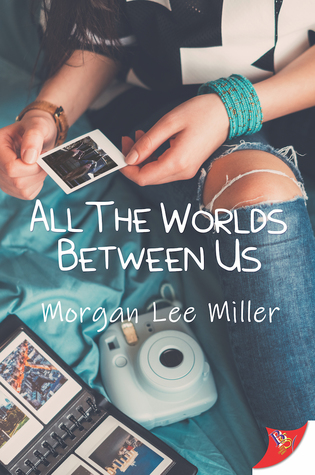 All the World Between Us by Morgan Lee Miller

Goodreads Summary: Seventeen-year-old Quinn Hughes needs to be in top shape if she wants to medal at the swimming World Championships in ten months. This means no easy distractions, no matter how pretty they are.

She’s still piecing her confidence back together after not qualifying for the Olympics, her relationship with her twin brother is getting worse the more he hangs out with the popular kids, and then Kennedy Reed suddenly squeezes herself back into Quinn’s life. The girl who was her best friend. The girl who gave Quinn her first kiss. The girl who hasn’t spoken to her since.

Soon, Quinn finds herself juggling her new girlfriend, training for the biggest competition of her life, and discovering she’s not the only Hughes twin with a crush on Kennedy Reed. All these distractions are getting to her, and if she wants that medal she needs to find a way to stop drowning on dry land.

I thought this was cute and the story was really interesting and fast-paced in a way that I read it in only one sitting! This wasn’t mindblowing in any way and does contain some tropes that I hate but overall, I believe this was a solid story.

Quinn is a swimmer, an amazing swimmer actually and was very close to making it into the olympics despite her age. However, she missed by 3 seconds and it eats at her constantly and we really see that in the narrative. She’s also openly lesbian and has a twin brother (who unlike Quinn, is one of the most popular kids at school). Their relationship is on the decline because of her brother’s new popular kid attitude. Then there’s Kennedy, ex-best friend and first kiss, who creeps back into her life.

The characters were not the most compelling but I did like some of their relationships. There was a nice f|m platonic friendship which I appreciated.

A gripe that I do have is that there’s a good amount of girl hate/mean girl tropes which was rather annoying. It really pulled me out of the story and there really wasn’t a resolution when it came to that conflict. We had a glimpse on the reasoning why the mean girl, Cassandra, is labeled as such but it wasn’t really explored that much.

I do wish there was more sibling relationship development with her twin brother since it’s one of the main subplots of the book. Quinn’s twin was also pretty unlikeable so it was actually difficult for me to empathized with him. He was pretty 2D as well.

Although a lot of people hate flashbacks, I think it would have made a lot of characterization stronger if there were some implemented. The story depends a lot on the past but was barely explored. I think we would have really had a better scope of the relationship between Quinn and Kennedy.

When it came to Quinn and Kennedy, I thought their romance was cute. I think my favorite type of romances are friends-to-enemies-to-lovers and this definitely fit the bill.

The main thing that really brought this book down for me was the plot twists. There were a lot of tropes that I am not a fan of and I do wish the author went a different way. I will say though that the plot is pretty faced paced so we don’t deal with these conflicts for long. I actually liked the ending considering it was a consequence of a bad plot point. It made the story a whole lot realistic and also hopeful.

Another gripe was that I was a tiny bit confused on the story’s timeline because I feel like it kept jumping forward a lot. The story was fast paced but it went a little bit too fast at times.

The book explores a lot of themes such as sexuality. There was a great amount of challenged biphobia, discussions of questioning sexuality, forced coming out (even though it occurred in the book), and there was a brief monologue of sorts about using someone’s sexuality as an insult.

And now Cassandra Jones tried using that gay label as the jab to end all jabs because apparently, if you couldn’t find a clever insult, just use the trump card of someone’s non-heterosexuality.

What I also loved about the book is that it narrated both the positives and negatives (even extreme) experiences of coming out to family members. I especially liked the discussion of the positives because we don’t get that a lot in books. The book explored therapy and school interference in negative, harmful home environments.

If you’re looking for an easy, quick cute f|f read, you should give this a try. This isn’t the best contemporary I’ve read but I still think it’s worth the read.  I feel like there isn’t enough f|f YA contemporaries (or maybe there are a lot more independent books in this category). There was an abundance amount of progressive events and experiences in the book which made this a more memorable read for me.  This was a solid debut and  I can’t wait to see what else this author publishes in the future!

I’m Quionna but you can call me Qui:) Reading, TV Binge Watching, Journaling, and more! Let's take this journey together. View all posts by TheBlackLitQueen

1 thought on “Book Review: All the World Between Us by Morgan Lee Miller| Just a Cute Queer Female Romance”

Blogger, Reader, Coffee Drinker, Avid Library Go-er. Please Check out my about page to learn more on why I advocate for representation in the publishing industry!

My Most Viewed Posts!